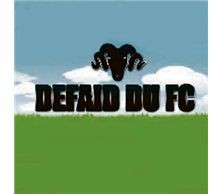 DEFAID Du have seized the day and applied for membership of next season’s Spar Mid Wales League second division.

The ambitious Llandrinio club submitted their application ahead of the deadline and will now join Montgomery Town, Meifod, Four Crosses, Llanfyllin Town, Kerry, Abermule, Llanfair United, Aberaeron, Bont, Tregaron Turfs, Rhosgoch Rangers, Talgarth Town and Llandrindod Wells in a 14 club second division, which is due to kick-off at the end of August.

Secretary Phil Woosnam confirmed the Du’s application had been received and should the club install dug outs and erect a perimeter fence by the agreed August 7 deadline they will be accepted.

“This is a very exciting and rewarding moment in our history and it has filled me with renewed enthusiasm,” said player-manager and co-founder Scott, who hopes to form a competitive squad for the step up.

FA Trophy Draw  All the latest Results and Fixtures