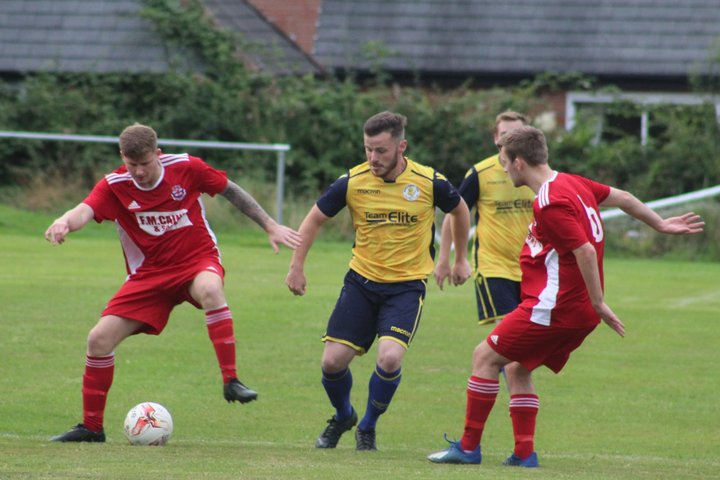 Knighton Town took advantage of several postponements to put distance between their themselves and their rivals with a comfortable 6-0 win at Montgomery
Leading goalscorer Taylor Wozencraft gave the Radnor Robins a 6th minute lead by taking advantage of a mistake in the Montgomery rearguard.Defender Josh Traylor doubled the lead immediately.Further goals in the first half by Dan Farmer,Tom Dwyer and a second for Wozencraft gave Knighton a 5-0 half time lead.
Montgomery Tightened ther defence in the second half and the only further goal was scored by player manager Mark Jones on as a substitute.
Hay St Marys inflicted a second double figure defeat to struggling Churchstoke with a 11-0 Win at Churchstoke.
Matty Tong led the way with 4 goals and Jack Cripps,Adrian Lawford,Jack Cook and Callum Maddt scored 2 each.
Bishops Castle inflicted a second defeat in a week on Waterloo Rovers with a 4-2 victory in a physical battle.
Three goals in a ten minute spell halfway through the first half by George Mellor,Jack Mellor and Rhys Roberts stunned Rovers and Sam Jones increase the lead early in the second half.Rovers reply came from Tom Ellis pen and Steve Jones.
In the West Division Barmouth completed a satisfactory weeks work with a 2-1 home win over Aberaeron.
George Southerns and Bobby Griffiths gave Barmouth a two goal lead.An own goal by David Inglis meant a nervy end before Barmouth claimed the points