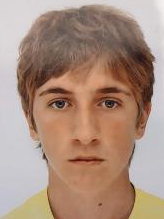 In a very hard fought encounter Tregaron Turfs held Ardal League side to a 2-2 draw in which all the goals came in the first 22 minutes.Penparcau went ahead after 4 mins when Mattie Davies netted after a fumble by the Tregaron keeper.
The lead was held for just 2 mins when Daniel Owen (pictured)took advantage of a poor clearance to score and scored his second 10 mins later when he charged down a clearance leaving him with a clear run on goal.The scoring was completed after 22 mins when a 35 yard free kick from Liam Lewis flew into the Tregaron net.
After last weeks 9-0 threshing of Talgarth,Brecon Corries made the short journey to Talgarth for the return which ended in a 7-0 victory.Goals coming from Paul Keddle 2,Joel Evans2,Philip davies,Craig Evans and James Jeffreys.

Newtown Wanderers continued in good form after last weeks threshing of Kerry by holding Ardal League side Montgomery to a 2-2 draw with goals courtesy of a Nathan Hughes free kick and a Tom Burlinson penalty.

Abermule were victors by 2-1 in the Dingle Derby against visitors Kerry who went ahead through a Dewi Williams og.However Abermule fought back to claim bragging rights with goals from Tomos Williams and Dave Anthony