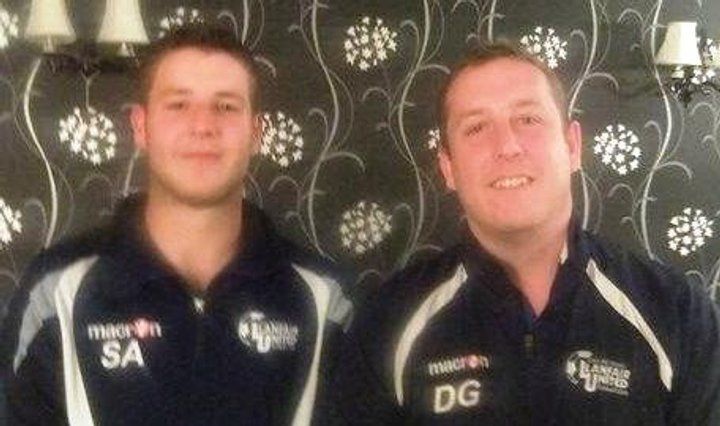 Saturday’s 3-1 win over Talgarth marked the first time that co-manager Steve Andrew (pictured with co-manager Daryl Griffiths) believes they have fielded a full strength side and the second victory of the season in front of a decent crowd saw them move into mid-table comfort.

“We have had a difficult start to the season,” he admitted. “We have often found ourselves with six or seven 'first teamers' missing each week, and with such a small squad we have struggled. But Saturday was the first time we could field our strongest team.”

New signing Matt Jones marked his debut with a goal on Saturday and will return to his old club this weekend in Llanfair’s colours. He came in for praise from the boss who also praised the increase in support the side has enjoyed this season.

“We had been after him for a while, but missed out on him at the start of the season,” said Andrew. “He was excellent against Talgarth. We have also put seven days on a couple of other players but they have decided to stay at their current clubs, so we will keep looking.

“We have been getting decent numbers watching each home game which is a massive improvement on the one man and his dog we had last season! The community does seem to be getting behind us a lot more which is very encouraging.”
Meanwhile, the club is in the process of submitting an application for grant money from the league to continue their ground improvements that will increase the length of the pitch.

 Where there’s a Will After notching 17 goals in his last seven games, Will Thomas has underlined his reputation as one of local football’s sharpest shooters

Crosses boss praises Spar set-up  Leaving the house early morning and returning 200 miles later on a Saturday night may not be everyone’s idea of ‘local’ football but Four Crosses are thriving on their long away days.