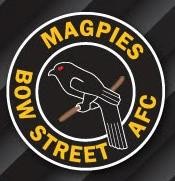 After months of intense speculation, Bow Street Football Club has announced that Emyr Jones will be their new manager from next season. Bow Street, who have just enjoyed the most successful season in their short history in the Spar Mid Wales League, were

Emyr ‘Brains’ Jones comes to Bow Street with an impressive managerial CV. He has successfully managed Aberystwyth Reserves for the last six years, where he led the Welsh Premier club’s second string to numerous trophies. He has earned himself a reputation as an excellent coach of younger players, and many of those that have come under his tutorship have gone on to play at the highest level. During his playing days, he spent a few seasons at Cae Piod, and was part of the Emrys Morgan cup winning side in 1983.
Club chairman Wyn Lewis stated, ‘We have been very fortunate in getting a new manager of the quality of Emyr to replace Huw, who has achieved so much in the last five seasons. Emyr’s track record speaks for itself, and we feel that this is the ideal time for someone of his experience to build upon and develop the team that has done so well in its first three seasons in the Spar League.’
Jones added, ‘This is a fantastic challenge for me to build on the excellent foundations that Huw Bates has established at Cae Piod. I am excited at the prospect of working with a squad of players who have proved themselves one of the best in this league over the last three years.’
‘I am thrilled at the prospect of managing Bow Street, a club that I have admired over the years, and also have fond memories of my time as a player at Cae Piod.’

Retiring manager, Huw Bates said ‘“I am absolutely delighted to hear that Emyr has accepted the role of
Bow Street manager. After five years in the job it was really important to me that we found someone who could take us to a whole new level and I think Emyr’s track-record speaks for itself.”.

“Although I’m still disappointed that I couldn’t bring some senior silverware to the club in my final season, I am still monumentally proud that we have achieved Bow Street’s highest ever finish in its long and prestigious history. However, I fully recognise the fact that in order to keep us moving in the right direction we need a fresh face with fresh ideas at the Club and after today’s appointment I am incredibly excited about Bow Street ’s immediate future.”.

“As for me, I am looking forward to my first summer in five years that won’t involve chasing players and arranging pre-season friendlies! I hope to have a few games for the reserves next season and will be on hand to give Brains as much (or as little!) support as he needs.”.

“I would like to extend my heartfelt thanks to everyone who has supported me over the past five years, especially my family, my fiancé Nia, Wyn Lewis and everyone connected with Bow Street . It has been an honour and a pleasure to be the Club’s manager and I look forward to exploring other roles within the Club next season’