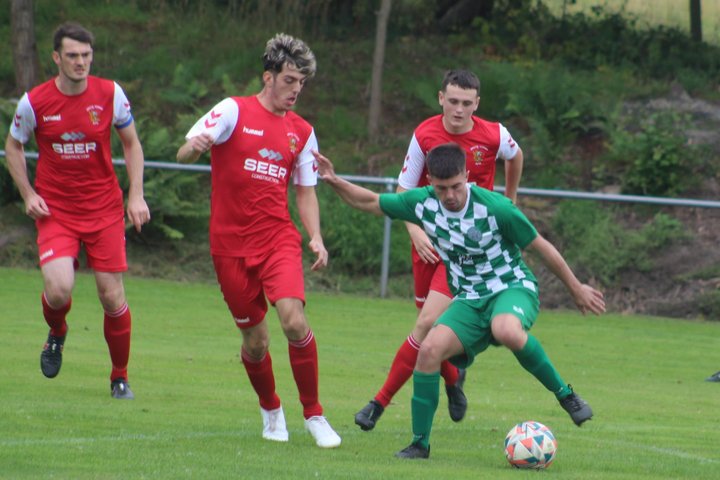 Abermule extended their lead at the top of the East Division with two weekend victories as Knighton Faltered.
Abermule gained maximum points with two closely fought games.
On Saturday they gained a 3-2 victory at Forden.They led 2-0 at half time with two strikes from Mike Humphreys.Although Tom Evans reduced the lead Abermule scored their £rd Through Tommy Jones.Forden scored a second in the latter stages through Tom Davies.
On Monday Abermule had to come from Behind to take maximum points at Montgomery.Lennon Brian gave the home side a half time lead with the equaliser coming from Dave Anthony.Abermule had to wait until the last minute to clinch the points through Charlie Humphreys and Tommy Jones.
Meanwhile on Monday Knighton tasted defeat for the first time as they went down at home to Builth Wells through first half goals from
Ciaran Price and Greg Preece.
Brecon Corries gained two fine victories on the road beating Radnor Valley 4-1 with goals from Rhys Thomas 2 Craig Evans and James Jeffreys with a reply coming from James Williams.
On Monday Corries visited neighbours Hay St Marys and were 3-0 up through Joel Evans,Jordan Baker and Dale Evans only to be pegged back with goals by Rob Snedden and Jack Biggs.Corries had to endure a nervy end to the match before clincing the points.
Hay had a dissapointing weekend as they also dropped two points in a 2-2 draw on Saturday.Martyn Ziemann and Josh Collins scored for Castle with a Matty Tong double for Hay.
The home side were reduced to ten men after 46 mins as Connor Beesty saw red .
Sastle followed this draw with a 4-1 victory at neighbours Churchstoke on Monday.Martyn Ziemann 2 Josh Collins and George Mellor got the Castle goals with Greg Pryce scoring a penalty for the home side who also lost 3-1 to Montgomery on Friday night.Montgomery goals came from Lennon Brian,Josh Griffiths and a Tom Price og with Greg Pryce scoring for Churchstoke.
Llansantffraids only action was a 2-2 home draw with Waterloo rovers with a Craig Williams double matched by Adam Gough and Luke Evans for the visitors.
Waterloo followed this up with a 4-2 home win against Forden to move up into second place.Rovers goals came from Jake Mantell 2 Tom Ellis and Gareth Turner with Fordens reply from a brace by Jake O'Donnell.
Newtown Wanderers went into the weekend looking for their first points but celebrated in style with a resounding 9-1 victory at Llanfyllin
Leading the way with 4 goals was Sam Williams.Rob Hartshorn also claimed a hat trick.Warren Sherwood and Huw Roberts completed the scoring with the Llanfyllin consolation coming from Liam Jones