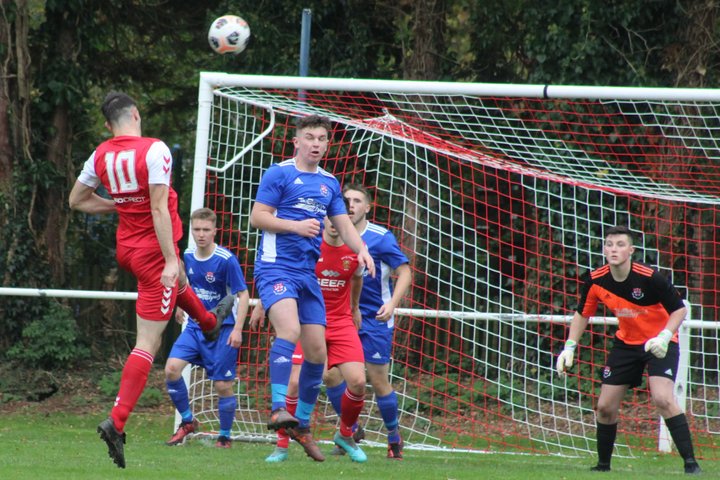 BUILTH FALTER AS LEADERS PUSH ON

Builth Wells lost their unbeaten league record on Friday when they were narrowly defeated at Hay St Marys.
Hay took a 2 goal lead in the first half through Liam McAnally and Jack Cook.
Builth managed to pull a goal back in the second half through Chris Roff but despite putting Hay under pressure were unable to find an equaliser.
Brecon Corries held their place at the top with an emphatic 5-1 home victory over Knighton Town
Craig Evans opened the scoring for Corries after 13 mins but Knighton hit back immediately through Tom Dwyer.Corries restored their lead after the break through James Jeffreys before Evans scored his second.Further goals from Callum Bain and Joel Evans completed the scoring.
Abermule are level at the top following a 3-0 home win over Newtown Wanderers.Goals from Tommy Jones 2 and Dave Anthony secured the points.
Also level on points at the top are Waterloo Rovers who hit back to get maximum points at home to Bishops Castle despite going behind twice Kieran Mulloch and George Mellor twice had Castle in front only for Rovers to hit back through Tom Ellis and Adam Gough with a late winner from Callum Foulkes.
Montgomery Town hit back to claim a point at Churchstoke who led with a Greg Pryce double before Aled Davies and Lennon Brian.Churchstoke played the last 20 minutes when Zac Emberton saw red.
Forden Utd were 3-0 home winners over strugglers Llanfyllin Town with goals from Darryl Jones,Steve Roberts and Ryan Jenkins.
A Joey Price double secured the points for Radnor Valley at Llansantffraid who replied through Craig Williams.
In the West Division Aberaeron secured an emphatic 5-0 home victory over Newcastle Emlyn with goals from Gareth Severs 2 Elwyn Edwards,Jamie Owen and Chris Aldritt.
Tregaron Turfs were 5-2 home winners over Dyffryn Banw with goals from Ifan Jones2 Ryan Davies,Rhun Garner,and Daniel Owen
Banw reduced the arrears with late goal by Joe Evans and Oliver Higgins.
The game between Tywyn Bryncrug and Aberystwyth Univ was abandoned after 44 minutes with no goals following a serious injury to tywyn Brynccrug captain Kevin Evans.