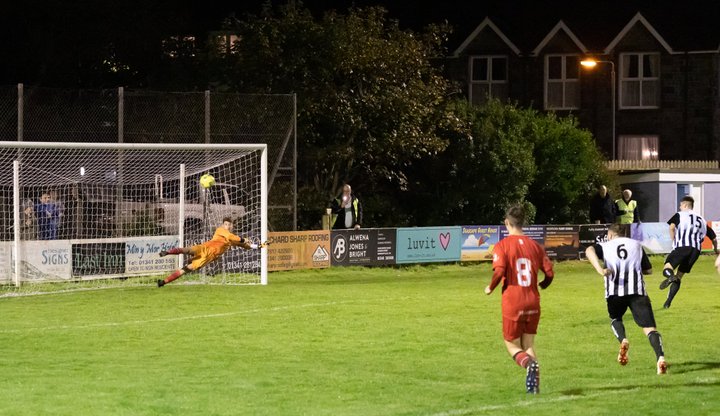 With most clubs involved in Emrys Morgan Cup action Montgomery and Knighton managed to complete their delayed first round league cup tie.
The Radnorshire Robins were quick out of the traps and enjoyed a three goal lead after twenty minutes with strikes from Taylor Wozencraft,Jack Brindley, and Josh Traylor-Hall.In the second half Wozencraft completed his hat trick with a further 2 goals .
Knightons goal tally was completed with a Finlay Francis goal and a Tom Pope own goal.Montgomery consolation goal came in the final minute from Toby Mills.
In A Monday night fixture an Impressive display from Aberystwyth University gained them the three points with a late winner at Barmouth despite finishing the game with 10 men.
The University took the lead after 23 minutes with a brilliant solo effort from Jargal Enkh and came close to increasing their lead on several occasions.
As the game progreesed in the second half Barmouth began to turn the screw only to be denied by some fine saves by the University keeper Josh Evans.
After 56 minutes Barmouth were awarded a penalty in the 68th minute when Bobby Griffith was fouled by Cormac O'Byrne.
The penalty was despatched by substitute Ryan Williams.
As Barmouth piled on the pressure The University had to resort to desperate measures and O'Byrne was dismissed for one foul too many.
With Barmouth attacking in numbers looking for a winner they were caught with a sucker punch as substitute Henry Isaacs took advantage of a defensive slip to secure the three points

 WEEKEND ROUND UP BUILTH FALTER AS LEADERS PUSH ON

WEEKEND ROUND UP  BUILTH WELLS CLOSE ON LEADERS